What does Landscape mean to me?

In one of my earlier posts I wrote that I’m most attracted to small wooded areas, within walking distance from home. These are places where nature has more or less been allowed some freedom to be itself. The air is always clearer there amongst the trees and I’m aware I’m breathing more deeply. I’ve been exploring and portraying ‘landscape’ almost since I began studying with OCA. To begin with I photographed what I saw then, in Context & Narrative, with the encouragement of my tutor, I began to interact more directly with nature – see here  and here . It seemed that, through landscape, I was ‘finding my voice’.

During this current Module I focussed my first assignment around a poppy field   but subsequently became absorbed in my personal archives and got somewhat lost in reading and research, although I did create some ‘personal’ projects around my local Copse, including videos. Holga photographs  and a project in July last year which I called Interrupted Landscape: Weftwood where I documented, in image and videos, the progress of my creation of an installation  in part of the Copse – to be the covering of a dilapidated garden seat with woven red wool. This project terminated rather oddly at the beginning of September 2017 when I discovered that other/s had dismantled that part of the copse, including the garden seat.  I concluded that I had, somehow, been seeking a response from other people who use the Copse (in the way I had previously by hanging some of my photographs on tree branches) but the response had been unsettling as a different kind of installation had replaced mine! I intended to do something with leftover wool but it still awaits me.

So where does that leave me with my relationship with landscape at the moment? I still photograph what interests me in environment using Instagram as a posting site. The poppy field, changed markedly in Autumn last year and I have videos of the changes over time there which I intend to put together before formal Assessment as an addition to my first Assignment.

Why do I photograph the same scenes over and over again?

Well, firstly, the landscape changes as the seasons change so there is always something new to see and photograph. Landscape can act as both metaphor and alter ego – I’ve certainly used it as both in the past – to combine with poems I’ve written or read. Trees always seem to have had deep meanings for us human beings – The tree of llfe in so many different World mythologies; the apple tree in the Garden of Eden; the tree of knowledge; the sacred groves which probably preceded the building of Churches with their soaring domes directing our eyes towards the heavens and the family tree of genealogy. I also got to thinking of the way in which we anthromorphize trees, see faces in them, give them human attributes. 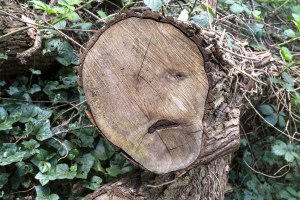 I know there are psychological explanations for why this happens, but could there be another connection?

There are so many different motivations for photographing trees, but I still couldnot find the words to explain why I kept photographing the same places almost compulsively.  I recently found a photographer who provided an explanation I could identify with.  In a video here photographer Sean McFarland talks about Landscape as a failed record. He talks of the way in which photographers have separated themselves from the landscape (in the USA, but I think it applies in the UK as well) through being ‘complicit in a lot of empty formalism’ and participating in a tradition of the history and destruction of the Western United States’. All that has causued us to ‘deeply other’ the landscape and to separate ourselves from being able to emotionally experience it. He describes viewing the splendour of a landscape such as Yosemite Falls, taking a photograph of it which is physical yet is a failure in terms of representing how it felt, especially if you’re showing it to someone else and trying to convince them that it was a magical experience. One of his strategies was to photograph the Falls multiple times to make it more than it was, and then creating a cynatope . – using photography as a ‘failed record’.  He has also created psrismatic images where the visual spectrum of red blue and green starts to reveal itself and be seen separately so maybe the photograph ‘can maybe turn into a synesthetic object’, allowing access to a world maybe beyond the visual. His visual blog is here .

What do I want to say about Landscape with new work?

I realised that constantly photographing the same scene was also my own attempt to find a way of emotional capture, without words and perhaps why I have used different camera techniques and other strategies such as cyanotypes.  I had certainly thought that cyanotypes wouldn’t be the way to go for this Assignment, even though I do enjoy creating those deep blue images. Sean McFarland’s prismatic images looked pretty much like 3D to me when I viewed them with my 3D glasses, so I created one initially of a branch structure in the woodland, and then had a go with one of the bonsai trees as, currently, the bonsai tree is representing landscape for me – the way we mould nature to our own image and also as a a reflection of Jean Baudrillard’s theory of simulacra and simulation. 3D glass needed to view these onscreen.

This might be a way to expand my Assignment 4 into Assignment 5 – I’ll wait and see what my tutor thinks.

In a later post I will write about my research into artists suggested by my tutor; some I have discovered myself and literature about the nature of trees. Alongside my photography of bonsai and reading/research, I have also been exploring Second Life and looking at how landscape is represented there.