Whilst I was researching Yorkshire artists painting during the 1940s I came across Harry Epworth Allen (1894-1958) see here who was born in Sheffield and lived there all his life apart from War service.  He was recognised as one of the Yorkshire Artists group and his style is often regarded as surreal. When I looked further at some of his paintings  they reminded me of David Hockney’s paintings – not in terms of colour but the use of curves and perspectives.

David Hockney was born in Bradford in 1937. He studied at Bradford School of Art from 1953-57, followed by National Service (as a hospital orderly due to being a conscientious objector) and then study at the Royal College of Art in 1959. A chronology of his biography and works begins here and he has had a rich and varied artistic career, embracing new forms of artistic technology with an enthusiasm and energy that provides a model for someone like me who is beginning to feel ‘elderly’ at times.

Hockney has often used the medium of photography. In the late 1960s he realised that polaroid shots of a living room, glued together, created a narrative. He began to work more with photography and stopped painting for a time but returned to it when he became frustrated with what he terms the limitations of photography and its “one-eyed” approach. In the early 1980s he produced photo collages, calling them ‘joiners’ . He arranged a patchwork to make a composite image, firstly using polaroid prints and then 35mm processed colour prints. Since 2009 he has painted many portraits, still lifes and landscapes using firstly an iPhone app and, since 2010, the iPad and he now carries his iPad around with him like a sketchbook.

I referred earlier to his comment on the “one-eyed” approach of photography and such comments are not new.  On drawing grasses “…I started seeing them. Whereas if you’d just photographed them, you wouldn’t be looking as intently as you do when you are drawing, so it wouldn’t affect you that much” ( M. Gayford 2011: 32.) On ways of depicting that world that escape the ‘trap’ of naturalism. “Most people feel that the world looks like the photograph. I’ve always assumed that the photograph is nearly right, but that little bit by which it misses makes it miss by a mile. This is what I grope at” (ibid 2011:47)

In 1995 Hockney painted Sunflowers for Jonathan  as a get-well painting for his friend and patron Jonathan Silver who had been diagnosed with cancer and just had an operation. This then became a photograph that appeared in an Exhibition of post-modern Photography I saw at the V&A in 2011, with the title Photography is Dead. Long Live Painting  . This is a photograph of a ‘real’ vase of sunflowers, probably referencing Van Gogh, seated next to a painted version which is positioned to appear in correct perspective for the camera. It is an inkjet print from a colour transparency, printed on watercolour paper. The title is ironic as it seems to decry photography but relies on the camera for its execution.

When I saw the photograph I thought it was delightful.  It made me smile and I thought what a wonderful get-well card it made – playful, yet clever and making a visual comment about photography.  I decided to create something in response for the exercise which then developed into my Assignment 1.

I developed this exercise by a rather circuitious route.

I have a very interesting book Snapshot : Painters and Photography, Bonnard to Vuillard (W.E.Easton (ed) 2011) that looks at early photography and how this was used by many Post-Impressionist artists. These artists made many personal and informal snapshots, some of which were used as an aide towards their painting, printmaking and drawings, similar to the way in which the camera obscura was used by artists in previous centuries. What I noticed in looking through the book again was how the style of some of the photographs – use of light, composition etc were mirrored in their Art, and vice versa. I mused upon what kind of artist I might be if I could paint, having made several attempts to learn over the years, and decided I might probably be an Impressionist. Having written that, though, I do have to acknowledge that I often look for clarity in photographs – not sharpness necessarily but clear distinctions. Maybe that’s two sides of the same coin though.

In June we were due to spend a few days in Honfleur, Normany – a town whose environs (including its port) was very popular with Impressionist painters due to its wonderful light (see here ).

Indeed the painters Gustave Courbet, Eugéne Boudin, Claude Monet and Johan Jongkind formed the école de Honfleur.  and I thought it would be interesting to re-visit the Eugene Boudin Museum, and be inspired by paintings there and what I saw in Honfleur to re-make one of their works.  Boudin’s works  are famous in Honfleur and one of his views of Honfleur can be seen here  on a website dedicated to him. Unfortunately, I arrived there to find that the Museum was closed for ‘works’ until August.

However, I did manage to find a gallery of prints of Eugene Boudin’s work running alongside the walkway to one of the lighthouses in nearby Trouville.

So, I returned home having re-made some existing works of art by photographing photographic prints of oil paintings, in-situ in an outdoor exhibition. Being dissatisfied with that experience I thought some more . As I’ve written previously I have in mind to use my own archive for some of the work during this Module, particularly photographs and letters from the mid to late 1940s and so I decided I would do some internet searches for Yorkshire artists from that period.  Some of the work of these painters then reminded me of David Hockney’s work in Yorkshire. This work is later, but, of course, he’s Yorkshire born and bred, as am I, so I decided to re-make one of his works using photography. This led me on to poppies in fields and Assignment 1.

I previously wrote about Jeff Wall’s work here  and have now taken a closer look at his re-staging of of Hokusai’s colour wood block print Ejiri in the Suruga province which is no 18 of his Thirty-six views of Mount Fuji . There is an excellent online site here but I enjoyed looking at Katsushika Hokusai’s work so much that I obtained a book of his views of Mount Fuji . In A Sudden Gust of Wind (after Hokusai) 1993 Wall transported the scene to the landscape around Vancouver. 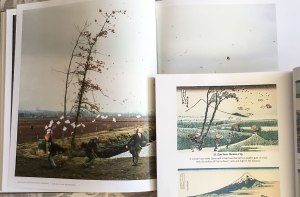 I don’t think Wall is  appropriating the print as an object and so questioning authorship but using it as an inspiration and transferring it to another time and landscape. I actually prefer the original because it has much more sense of movement to me even though a print from wood-block. What also came out for me was that reminder of how nature can take us by surprise with similar events occurring  despite distance of time and continent.

Wall’s carefully composed and intricately image was shown in a lightbox in Exhibition and Laura Mulvaney wrote an article about it in the Oxford Art Journal (Extract here ) In the original article Mulvaney writes,

I was fascinated and bewildered by the seemingly incompatible temporalities it depicted –100 separate photographs fused together into a seamless tableau. In the tradition of the ‘instant’ but, at the same time, the perfection and simultaneity of nature and gesture was more reminiscent of the carefully composed effects of a Hollywood studio. I was disorientated and unsure of what I was actually seeing. (Mulvaney, J 2007)

Mulvaney wrote further – once she had discovered how the photograph was created – that she felt that she had experienced a ‘technological uncanny’  that she thought was interesting for three reasons – the actual sensation, the evocation of C19th experiences of new and multiple forms of technological uncanny, then followed by a new interest in Wilhelm Jentsch’s 1960 essay On the Psychology of the Uncanny later dismissed by Freud in his later essay on the same topic. I wrote about the ‘uncanny’ previously here  and I keep asking myself why it is that the woodblock print with its stylized figures seems more realistic to me and with more sense of life than the digital montage created by Wall that incorporates actual people.

Wendy McMurdo’s experiments began at an early stage in the introduction of digital photography. Double images of children were used to both explore issues of identity and to represent the first generation of ‘digital natives’ .  In writing of the dematerialisation of photography occasioned by the transition from analogue to digital, Daniel Rubenstein (2009) refers to McMurdo’s work. In his view this work

….problematises the notion of the dematerialised digital image, suggesting that it is not defined by the absence of materiality, but on the contrary, by the presence of the observer who evaluates the differences and the similarities between the original and the digital double (2009: 6)

Going back to my responses to Jeff Wall’s work, maybe this is a part of it. Obviously I compare the photograph with the print but, I know that the figures in the print are representations of people. What I look for in the photograph is a sense of life – a living breathing person and yet I am stopped because I cannot tell if the montages are actually of the same person or different people. Wall could have used several people but, then, why fuse 100 photographs together.

I have written before about my own experiments with digital montage in relation to self-portraits and how, when presented with another version of myself, I didn’t know what kind of conversation I would be having – there was no purpose to the montage other than to see if I could create one.    Seeing dual images together ‘stopped’ me. I might have found it easier to use the chair techniques in Gestalt psychotherapy – a physical movement between two chairs where I would feel myself as a real person in each chair yet with conflicting feelings/thoughts.

I have recently created a digital montage of four photographs of my husband in our garden. He rarely stands still long enough for me to take a photograph, in fact we have very few photographs of him compared with the hundreds he must have taken of me. I both enjoyed creating the montage and also the feeling of ‘capturing’ him.

I also spent some time creating a landscape digital montage.  Our local Church now has a labyrinth in its grounds. 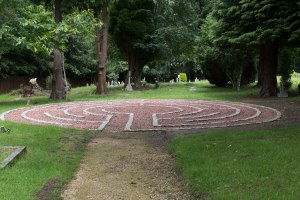 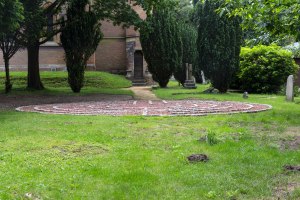 What if there was a labyrinth in the woods.

Think of where it might lead as you venture around its paths. 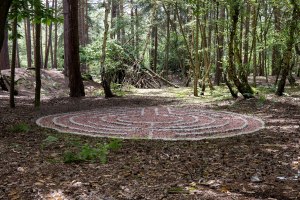 Labyrinths fascinate me, founded as they are in myth and tales of heroes and heroines. I could build a story around this.