Write 500 words on a piece of work by one contemporary artist-photographer who uses the archive as a source material.

I have already written about several such artists but wanted to write about some work with which I felt a more personal connection.

In the introduction to her website Faye Claridge   refers to her ‘fascination with representation and belonging in a country obsessed with (constantly reworked) history’ and how she explores the way in which ‘identity’ is shaped by ideas about the past. I share her view on the importance of, “.. understanding ideas of ‘Englishness’ based on social equality, inclusion, diversity and internationalism”. I am interested in the way she enters into collaboration with others, often young people, to explore these issues, and how she uses, performance, film and photography to to create contemporary work.

I was introduced to her work during my research into GRAIN   and their collaboration with the Library of Birmingham. Claridge was commissioned by GRAIN, initially through a turning Point West Midlands Residency, and worked extensively with the Library’s  Sir Benjamin Stone Collection. I clicked on to GRAIN’s website and immediately felt a personal connection when I saw this.

A huge doll, mannequin? For a brief instant I was reminded of Royal de Luxe and the Little Girl Giant, but this “Kern Baby” was something more, with deeper roots. Claridge was inspired by Stone’s own photograph of a Kern Baby in Whalton, Northumberland, from his album of unusual festivals and customs taken as he travelled around the country

(Downloaded with the permission of the Curator’s department, The Library of Birmingham )

They both stand proud in the landscape. Stone’s Kern Baby standing out from her backdrop of greenery through her pale dress, whereas Claridge’s Kern Baby dominates the landscape. Both continue the old tradition of corn dolls, practised in many countries in different ways, from pagan times – shapes fashioned from the last sheaf of wheat or other crop and celebrating the harvest – some small and some very large. Faye Claridge’s sculpture was created as a result of a commission from Compton Verney  , with the photograph being exhibited at the Library of Birmingham in an Exhibition in  during 2016.

Here is a video showing how Faye Claridge then brought Kern Baby back to Wharton,Northumberland, so completing the circle from Benjamin Stone’s photograph in 1901, and also her regrets that the tradition is no longer continued there. 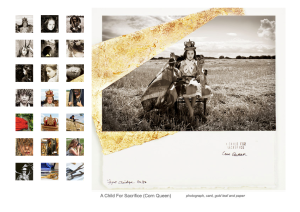 There is a mix of black and white and colour (referencing Stone’s interest in different processes) with a feel of a traditional event brought into present day through this artistic collaboration.

Thanks again to Faye Claridge and the Library of Birmingham for agreeing to my use of the images.

I have always been interested in traditional folk tales and present day traditions/events that hearken back to much earlier practices.  In fact I’ve often wondered how much people know of their origins. When I was comparing Sir Benjamin Stone’s images with Faye Claridge’s work.  I was taken back to May Day events when I was in school, dancing around the Maypole as well as the other performances such as being principal boy in “Coppelia” and playing Minuet in G on the piano whilst dressed in a paper crinoline (which I afterwards inadvertently stepped through and tore). Looking at Stone’s archive also linked with some of the photographs in two albums I purchased from eBay which contain photographs taken at my school in the 1940s and early 1950s. Sadly I don’t appear there though 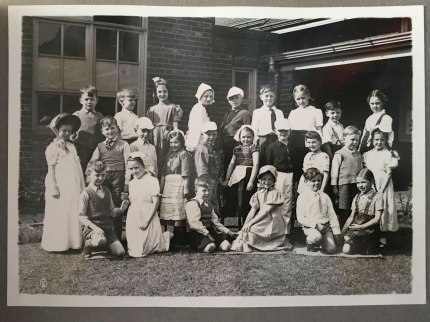 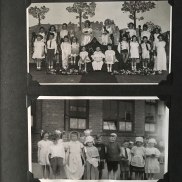 Presumably taken by one of the teachers, and with the last one hand-painted.

Looking at the three sets of images made me think  about the differences between the vernacular – a teacher (perhaps) recording an event where teachers and children had worked together to produce a ‘performance’ and the artistic – an early, gifted amateur photographer recording an event as he travelled around the country and a contemporary artist creating sculpture and performance events, with collaboration from youngsters, and recording the results. I also thought of the way in which children’s school performances can now be subject to restrictions (e.g. Nativity Plays are sometimes regarded as politically incorrect due to the mix of cultures in a school) so new performances/events need to be created that represent present-day culture. I am also questioning ‘identity’ and how its formation is linked with nurture, environs and cultural/social history and tradition particularly against the background of current political events, but that’s a much wider topic than I can address here.