“A Handful of Dust” Exhibition at the Whitechapel Gallery, curated by David Campany
OCA Study Visit on 2nd September 2017

Thirteen of us met with tutor Jayne Taylor at the Whitechapel Gallery to explore the Exhibition, then have lunch together followed by a post prandial discussion.

The Exhibition begins with the long exposure photograph said to have been taken by the photographer Man Ray on the occasion of a visit to the studio of Marcel Duchamp in 1920 to photograph Duchamps’s work the Bride Stripped Bare by Her Bachelors, Even (The Large Glass).When you look here  you can see that Dust is even listed as a Medium of the work so I wondered if that’s a modern nod to Man Ray’s photograph or something originally intended by Duchamp.  Having now done some internet researching I found an MA thesis  (2007) by Jonathan R. Fardy  which refers to Duchamp having intentionally allowed an accumulation of dust to collect   Duchamp titled the photograph Dust Breeding but when it appeared in the October 1922 edition of Littérature  the text (written by both Man Ray and Duchamp) was credited View taken from an airplane by Man Ray 1921.

In a 2015 interview with Aperture Magazine discussing his book A Handful of Dust     David Campany (the curator of the Handful of Dust Exhibition) refers to his feeling that “….there was a whole history of the last century that could be extrapolated from that one image”. He goes on to say, “A thickness of dust is a measure of time.  It’s also a latent sign of actions or processes.  It’s domestic but cosmic too. To see the world from the point of view of dust will give a different perspective of history and civilization.” The Exhibition isn’t about dust as such, but uses it as a pivot around which to muse upon photography as a creative act. I think that includes the way text is used as well given that the same photograph with two different captions leads/misleads in different directions.

This was one of those occasions where I didn’t read up on the Exhibition before I visited and  I had two main responses to it on the day. Firstly, in answering the question afterwards as to what our response to the Exhibition might have been if we were not photographers, I answered along the lines of, “I would have walked straight through it”. I might have thought it interesting but no more than that. It had a rather grey, dessicated  atmosphere for me maybe because the images were mainly monochrome. I even thought that it was more of an Exhibition for photography students, especially considering that David Campany is an academic at the University of Westminster. There is something there around stretching a concept as far as possible in philosophical discourse, as does Lisa Stein in her article in Photocaptionist  (6 June 2016) where she muses upon Campany’s book; Man Ray’s photograph; Poussiere [Dust] George Bataille’s reimagining of the Sleeping Beauty fairy tale, and a quote from Winfried Georg Sebald which also appears in the Exhibition.

In discussing this quotation Lisa Stein turns the notion of ‘the decisive moment’ on its head by  referring to Bataille’s ‘total embrace of the experience of ‘not-knowing’ which he perceived to be prerequisite for the creative act”, so that creative potential lies dormant in any photograph and its meaning ‘might lie in what follows its circulation’. This can certainly be applied to Man Ray’s long exposure photograph.

Some images that drew my attention 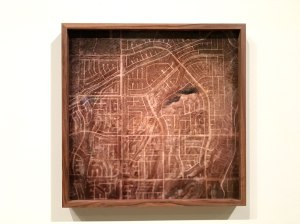 Ruins in Reverse (2012) a photograph of a computer screen showing a Google Earth view of California City, a planned but abandoned settlement in the desert. This is actually from Private  a series that links together nudes, desert, form, light, shade and shadow and David Campany wrote Stardust an essay for the book  of the series.

Royal Road Test  (1967) documents, in a quasi scientific manner,  the dropping of a royal typewriter from a speeding Buick car and what happens .  It was a collaboration between Mason Williams, Edward Ruscha and Patrick Blackwell  and it seems to me that they had fun doing it.  The book itself was one of a series of mass produced and cheaply printed books, created by Ruscha, that parodied the American romantic vision of ‘the road’. It was also, apparently, an influence in the making of the film California typewriter  ‘a documentary portrait of artists, writers, and collectors who remain steadfastly loyal to the typewriter as a tool and muse’ – an apposite bringing together of old/new, digital/analogue.

On the 24th February 2004 Necso-Acciona, owners of an empty industrial plot in Barcelona, evicted some 60 Gypsy families living there by digging and lifting the concrete floor of the site. The remains continue to give testimony of this displacement.

A powerful image for me, evoking my feelings and memories of that day with the cement dust-covered statue serving as an early monument here to all those who were killed.

Stenram downloaded from NASA high-resolution digital files of images made of the surface of Mars. She then transferred these to colour negative film and left the negatives under her bed to gather dust before using them to make prints – thus combining the cosmic and the domestic as one.

From his series The Patriarch’s Wardrobe (2010)

Photographs taken on a landfill site south of the city of Hebron (situated on land once called Palestine). The waste delivered there comes from Jewish Settlements in the Judea region of the West Bank. Before the waste is buried it is scavenged by Palestinian children working in groups for adult ‘handlers’. Waplington worked at a distance to avoid revealing identities.  The photographs are juxtaposed with paintings made of the landscape of the West Bank. Each painting represents a piece of this disputed land, and is based on colours caught by the photographs and then reworked in Waplington’s studio. The series as a whole has so much to say to me on ‘waste’ of people, cultures, lives not to mention commodities.

Having now looked at the iPhone images I took in the Exhibition and researched/read about the photographs and their creators, I agree with George Bataille and Lisa Stein. Prompted, of course, by the words of David Campany, my mind has worked along the concept of dust, waste and creativity and so I have woven my own stories around particular photographs that attracted me; created my own tapestry view of the Exhibition. I’m aware as well that I have also picked out some colours from monochrome whilst also being mainly drawn to contemporary conceptual photography. I can understand the colour aspect because that’s always been my preference but less sure regarding conceptual photography as being the path for me given that I’m still drawn towards landscape photography. Let’s wait and see.